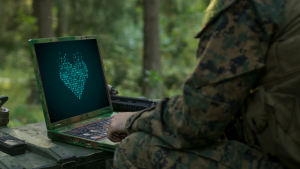 We were contacted by a woman who had been searching for love online.  She met a man by the name of “Tom”. The sparks began to fly and they communicated frequently via text and video. Tom often wore fatigues in their video calls. He told her that he was deployed overseas but lives in Southern California, so she was hopeful they could someday meet in person.

After a couple of days of interaction, Tom said that he and his “fellow Marines” weren’t getting enough food, which he blamed on politics. She offered to send him food and money. Instead, Tom asked for Bitcoin as payment since he was “deployed”. Fortunately, she didn’t fall for that excuse.

After the Bitcoin scam didn’t work out, Private Tom asked for help again. He said that the only way that he could receive his “deployment bonus” was to put a credit card on file. He told her that his accounts were frozen and asked if he could use hers instead.

Thankfully, she didn’t fall for the second scam attempt, either. After she contacted us, we conducted a background check on the subject based on the information he provided. We could not find a match. It turned out that he wasn’t in the Marines after all. Tom discontinued communication with our client once he realized she wasn’t going to give him any of her hard-earned money.

If you ever find yourself confused about a situation or a person, please don’t hesitate to contact us for further verification or help. This particular client thought she had a good romantic connection with somebody, but thankfully spotted the red flags. Because she reached out to us so quickly, she prevented a bigger heartbreak down the road.

About the Author: Eric Peterson